Displaying Haiku on an External Monitor from a Laptop or Netbook

From time to time I hear people saying that they cannot user their external monitor with Haiku from a laptop or netbook. While it is true that there is not much multi-monitor support in Haiku, there is still a very simple way that may just allow you to do this without any difficult tinkering. I came up with this trick a few years ago, when I was scheduled to give a Haiku talk at the Kansai Open Source conference in Japan. I had Haiku installed on my laptop, and for the presentation I had to use a projector to display the system on a big screen. However, switching to the external video output was not possible in Haiku. This was very bad news for me, as I wanted to run my Haiku demo natively, as opposed to in a VM, and that would have not been unless I could drive the PC projector. Well, with a bit of imagination, I came up with a simple but effective trick to do just this, and I am sharing my little secret with you.

For those who may be expecting some of sort of hacking on a configuration file or obscure commands from Terminal, I am sorry to disappoint you. My solution was much more primitive, if you will, but quite effective. At home I had used my laptop hooked to my TV via an analog output, so I thought I would try switching the video output using the laptop's keyboard before booting Haiku and see if Haiku would be tricked into using the external video output. Lo and behold, this worked, and suddenly I had Haiku running on the big screen. What a relief! Once I got Haiku running on the external video, changing resolution and color depth works as usual using the Screen preferences, so I could adjust the image to my liking.

Whether this method works for your or not will depend on your hardware. If your laptop has a hardware-based video output switch, it is most likely triggered via one or more keys on the keyboard; if that's the case, the likelihood that this trick will work is high; at least, I have tried on several laptops over the years, and it has never failed. In fact, when I went back home after the conference, I tried this trick hooking up the laptop to my 22 inch LCD, and it worked too! 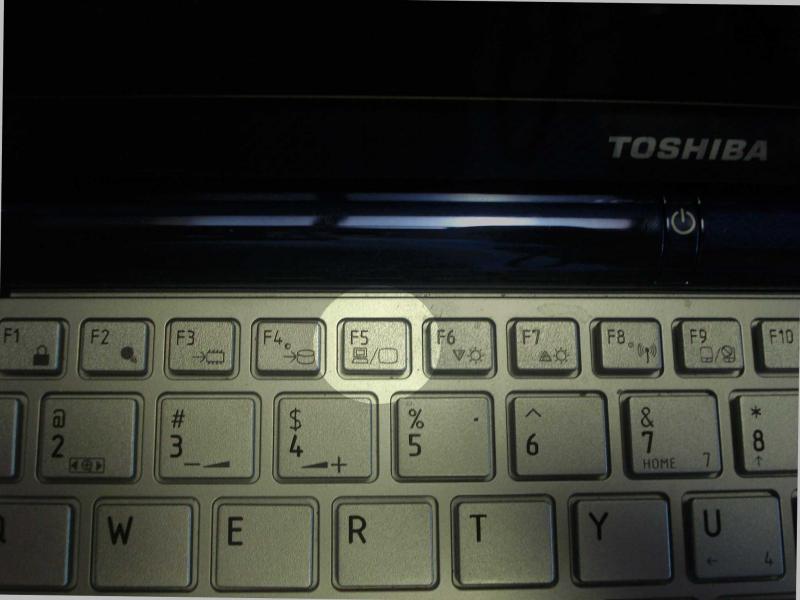 Closeup shot of a TOSHIBA netbook keyboard, where you can see the video output switching key (F5).

Please note that depending on your hardware, you may not need to resort to this sort of trick at all. I believe the Haiku NVidia drivers has multi-monitor support, in which case you would be able to manage the video output from Haiku's Screen preflet. But if you happen to have a laptop for which Haiku does not offer multi-monitor support, then check your keyboard and see if there is a single key or a combination of keys to switch the video output, and try this out. If it works, then you will be rewarded with the joy of being able to use Haiku on a larger external monitor.

Tutorial written by Jorge G. Mare (koki) 24 August 2010 - Haikuzone
Made available by BeSly the BeOS, Haiku and Zeta knowledge base.