If you're like me, you've been following the Haiku project for a little while, and are probably pretty excited about the recent alpha release. Wait, what? You haven't heard of Haiku? Well, Haiku is an open-source near-re-creation of BeOS, which was a revolutionary operating system for its time. Since I wasn't into computing back then, I can't justify describing Haiku and BeOS here, so here are some links to fill you in:

Getting Started on Haiku

Ok, now that you know what Haiku and BeOS are, you may be interested in contributing to the Haiku project if you are a developer. A lot of people have come onto the Haiku channel on Freenode lately (#haiku) asking for a simple starter application, so this post will give you the code for a simple "Hello, World" application that prints "Hello, Haiku!" to the console whenever you click a button. Here's a screenshot of the finished product: 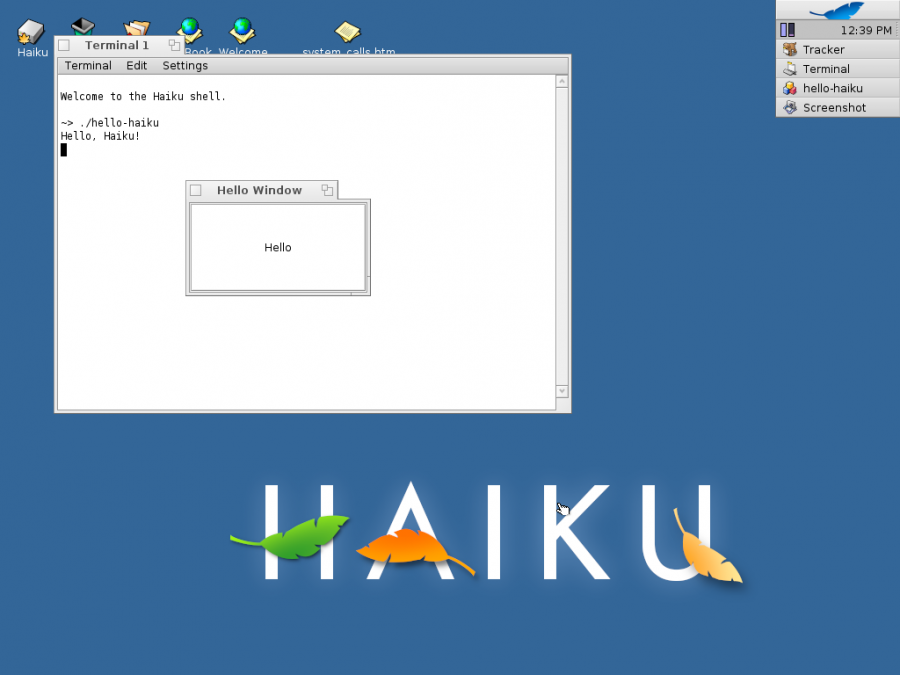 To build this code, you of course need to be running Haiku. Download an image and run it with QEMU or VirtualBox (it's really easy to set up!) or grab a LiveCD from their site here, run it, open a Terminal, and use this to compile the code:

If you're unfamiliar with GCC's compiler options, -o specifies the output file, and -lbe tells GCC to link to the be library, which contains all of the object code for this example.

Alright, let's go over each section of the code together. I assume you have at least a passing familiarity with C++ while going through this, so this first part should look pretty familiar to you:

These are include directives for including the headers for the Application Kit (which includes the BApplication class), the BButton and BWindow classes (which are in the Interface Kit), and the standard I/O library for C. This talk of kits may be strange to you, so let me clarify: Software libraries for BeOS (and thus Haiku) are organized into kits. Each kit has a specific purpose; for example, the Application Kit is used to communicate with Haiku's application server, while the Interface Kit is used to build GUIs. There are many more kits available, but I'm only going to mention those, since those are all that are used in this tutorial.

This code defines a specialized Window subclass. We'll go over each of the overridden methods in detail.

This code defines a constructor for our new Window class. It takes a BRect as an argument, which defines its size and position on screen. It provides this and some other information to BWindow's constructor; you can read about the details of that constructor in the documentation at the bottom of this post. Next, it creates a BView, which you can think of as a container for widgets. It adds the view to its list of children, and adds a button to the view's list of children. The arguments for the button are a little more important to this tutorial, so I'll explain them in detail.

This method overrides BWindow::QuitRequested, which is called when the close button (the button on the left side of the window's title tab) is clicked. This code:

sends a B_QUIT_REQUESTED message to the application, requesting that it quit. You'll notice I also presented an alternative:

This code does a similar thing to the code above, except PostMessage doesn't wait for a reply message. Also, you'll notice that PostMessage uses be_app, not be_app_messenger. be_app is a global pointer to our application object, and be_app_messenger is a global BMessenger object that can send messages to be_app. If you'd like to learn more about BMessengers, please consult the documentation.

We then return the result of the superclass' version of the method, which is true. Returning true from QuitRequested means that it's ok for this window to close.

The MessageReceived method is called when a message is received (Note: some special messages, for example B_QUIT_REQUESTED, have their own hooks (like QuitRequested) and do not go through MessageReceived. Please consult the documentation for specifics). Here, we print ?Hello, Haiku!? whenever we receive our custom message from the button, and we call the superclass' version in other cases.

This part you should recognize; it's the entry point for the program. All this does is create an instance of our application and runs it.

Well, I hope you enjoyed reading this tutorial as much as I enjoyed writing it. For documentation on Haiku's API, please consult the Be Book. If you have any questions or comments on this post, feel free to e-mail me at This email address is being protected from spambots. You need JavaScript enabled to view it..

Tutorial by Rob Hoelz 2009
Made available by BeSly the Haiku, BeOS and Zeta knowledge base.